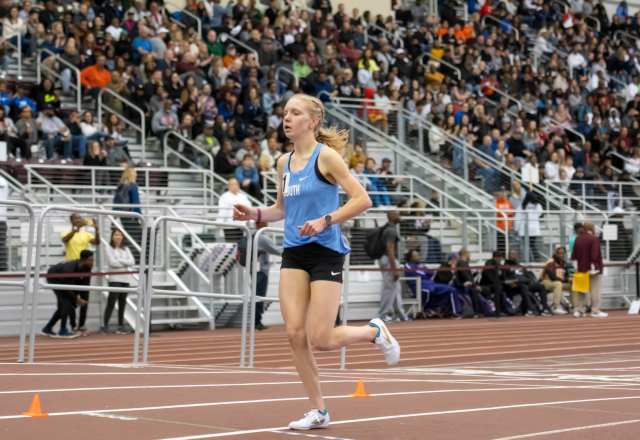 The 2020 high school track and field season is underway and things got started at the annual high school indoor classic held at Texas A&M in College Station, TX.  A lot of athletes from 1A through 6A were well represented.

There were many spectacular feats performed over the weekend but none was bigger than the effort put up by Denton Guyer's Brynn Brown in the 2 mile run.  Running in her 1st indoor competition...ever, Brynn not only won the event, but she broke the record of 10:36.07 held by McKinney North's distance queen, London Culbreath.  To say she broke the record would be an understatement.  More like obliverated would be more like it.  The junior from Denton Guyer set a new standard with a time of 10:08.11, taking nearly 30 seconds off the old mark.  After the race Brown stated "this was my 1st time running indoors.  I almost got dizzy running around in those circles."  She left her competition in a circluar daze as she ran circles around them...literally.

One of the most highly anticipated races of the evening was in the girls 60 meter hurdles.  You had two of the top hurdlers in the state going head to head in this battle.  This is nothing new for these two because they go head to head a lot....in practice.  Desoto's Jr. Jalaysi'ya Smith and Sr. Jayla Hollis finished 1st and 2nd respectively.  At the sound of the gun, Smith got a quick and early start and never looked back.  Her time of 8.50 was 9 hundreths off the meet record set by another Desoto Eagle, Alexis Duncan, 8.41.  Having a training partner like Hollis is a bonus opportunity that Smith states helps them both.  "Her strength is my weakness and my strength is her weakness so we push each other everyday to help strengthen our weakness and we both get better" stated Smith.

Friday night, we saw Arkansas commit Brayden Hodgest come up big...wait...HUGE on his last throw of the competition.  His final throw was a big time personal best 58-11 1/4.  He went into his final throw in 3rd place trailing Kevin Kindt (58-6) and Bryce Foster (56-8 3/4).  He was quick on his spin move and had great trajectory when the shot released.  Hodgest will be looking for some home field advantage as he travels up to Arkansas to compete in the high school competition there next weekend.

One disappointing moment of the meet was not seeing Layla Owens and Jayla Hollis battle to the 200 meter final.  They both ran the 2 fastest times in the prelms being the only girls to break 24 seconds Friday night.  During Saturday's finals, both were a No-Show.

There were a lot of athletes in attendance and a lot of great action.  The 2020 track and field season is underway.  The start of another great season has started.